Followers of all major religious faiths come to Gujarat for pilgrimages as Gujarat is home to many chief pilgrimage sites. Hindus, Muslims, Christians and Jains have historical places of worship here. We have listed the most visited places here:

Dwaraka is known all over the world for the Dwarkadhish temple, the ‘Lord of Dwaraka’. This temple is also known as the Jagat Mandir or the temple of the world. The temple was constructed over 1400 years ago and is dedicated to Lord Krishna. The city of Dwarka due to the presence of Dwarkadheesh temple has become of the most famous pilgrimage places for Hindus and attracts pilgrims from all over the world. This temple is magnificently built on the traditional lines and has five floors supported by 60 columns. The temple is profusely carved from the base to the pinnacle. 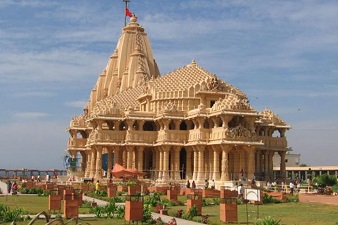 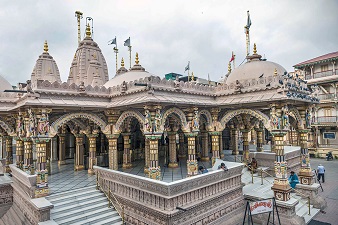 Swaminarayan Temple is situated in the old Ahmedabad city. This glorious, multicoloured, woodcarved temple looks like a grand haveli dating from 1850, surrounded by a large courtyard.

Hathee Singh Jain Temple is the best known Jain Temple in Gujarat. It was constructed in 1848. The construction of the temple was initiated and originally planned by Shet Hathisinh Kesarisinh, a wealthy Ahmedabad trader who died at 49. The construction was supervised and completed by his wife Shethani Harkunvar. The temple was built during a severe famine in Gujarat. Building the temple employed hundreds of skilled artisans which supported them for a period of two years. The temple is dedicated to Dharmanatha, the fifteenth Jain Tirthankar. 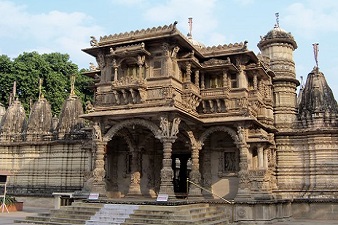 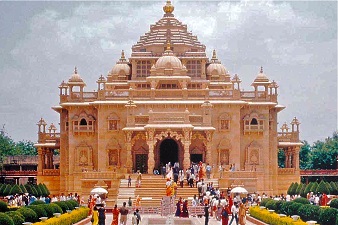 The Akshardham temple is made as tribute to Lord Swaminarayan and his life and teachings. The temple is one of the architectural wonders in itself and was built by the Swaminarayan BAPS Sanstha. The temple in Gandhinagar was the first one built by BAPS sanstha and now has its presence in other cities like Delhi and Jaipur as well. This temple was built by nearly 1000 artisans. It is an elaborately carved building constructed out of 6000 tonnes of pink sandstone from Rajasthan and is surrounded by the immaculately manicured lawns and gardens.

Dedicated to Lord Hanuman, at Bala Hanuman Temple on the southeastern side of the Ranmal lake, there has been continuous chanting of the prayer “Shri Ram, Jai Ram, Jai Jai Ram” since 1 August, 1964. This devotion has earned the temple a place in the Guiness Book of World Records. Early evening is a good time to visit as the temple and whole lakeside is bustling with life. 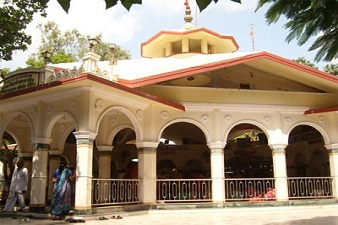 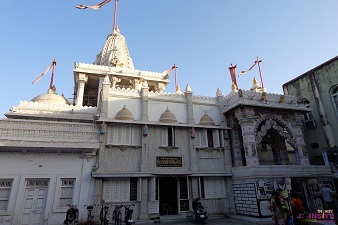 In the thick of Chandi Bazaar, Jamnagar are four beautiful Jain temples. The larger two, Shantinath Mandir and Adinath Mandir, dedicated to the 16th and first Tirthankaras, are decorated with fine murals, mirrored domes and elaborate chandeliers. The Shantinath Mandir is particularly beautiful, with coloured columns and a gilt-edged dome of concentric circles.

The Sun Temple is a Hindu temple dedicated to the solar deity Surya located at Modhera village of Mehsana district, Gujarat, India. It is situated on the bank of the river Pushpavati. It was built in 1026-27 AD during the reign of Bhima I of the Chaulukya dynasty. No worship is offered now and is protected monument maintained by Archaeological Survey of India. The temple complex has three components: Gudhamandapa, the shrine hall; Sabhamandapa, the assembly hall and Kunda, the reservoir. The halls have intricately carved exterior and pillars. The reservoir has steps to reach bottom and numerous small shrines. The architecture of the temple is such that the rays of the sun fall directly over the image of Sun God in the temple at the time of the equinoxes. 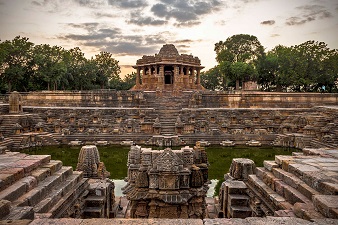 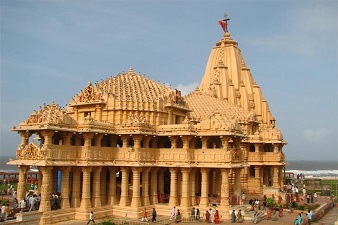 The legendary shore temple of Somnath is located near Veraval and is about 80 kms from Junagadh. The Somnath temple is one of the twelve most sacred shrines dedicated to Lord Shiva. The temple contains the Jyotirlinga of Lord Shiva. This temple has a very long history. According to the legends, the Somnath temple is very old and was originally built in gold by the Somraj, the Moon God. Later, it was rebuilt by Ravana, in silver; then by Krishna in wood and by Bhimdev in stone. Mahmud of Ghazni, upon hearing the description of the richness of the Somnath temple by Al Biruni, an Arab traveller, visited this temple in 1024 AD. At that time, this temple had about 300 musicians, 500 dancing girls and 300 barbers to shave off the heads of pilgrims. After a 2 day battle, Mahmud destroyed the temple and carried away jewels and gold to his homeland. The Somnath Temple was raided again in 1927, 1934 and 1706. In 1706, this temple was raided by the Mughal emperor Aurangzeb. In all, the Somnath temple was rebuilt and destroyed eight times. This temple was finally rebuilt in 1950 with the support of Sardar Vallabhabhai Patel. The current temple was built as per the traditional designs on the original site by the sea and is a serene, symmetrical and sinuous structure. Today, this majestic temple is a replica of the earlier temple.

Poshina is home to a tripal shrine where you find the staggering scene of thousands of terracotta horses standing in rows as offerings to the local Goddess. Nearby villages have similar horses carved in reverence to her divinity. A visit to the homes of the potters who make these striking horses is an excellent chance to glimpse into tribal culture. These are old Jain Temples and an ancient Shiva temple too here. 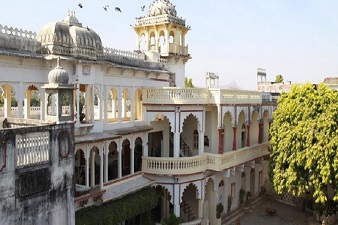 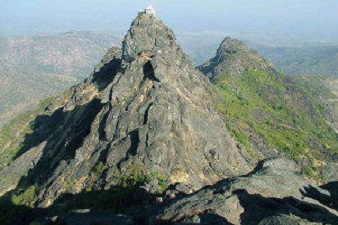 Mount Girnar is most sacred to the Jain community. This hill is situated in Junagadh and rises to a height of more than 600 m, a climb marked by 10,000 stone-steps. On this hill various Hindu and a group of 16 Jain temples are located. This sacred hill is visited by millions of Hindus and Jains. The Amba Mata temple is situated on the top of the hill. The newly weds come here to seek blessings of Amba Mata for a happy married life. One of the largest and the oldest Jain temple, dedicated to Neminath, the 22nd Jain Tirthankar and Mallinath, the 19th Jain Tirthankar are situated just below the Amba Mata temple. Besides this the Bhavnath temple is also located on this hill. The Bhavnath temple is dedicated to the Lord Shiva. The Mahashivaratri fair held here is attended by Nagasadhus and pilgrims from all over India.

The Shatrunjaya Hill is located at a height of 591 metres. The Shatrunjaya Temple is the most sacred temple of the Jains and one of the largest of its kind in India. One has to climb up the hill for about 4 kms (600 meters) on a stepped path to Shatrunjaya (place of victory over worldliness). You can reach this place either in Doli or lift chairs or by walking. There are about 863 white marble Jain temples, built over 900 years on the hilltop, each with its own enclosure. There is a stunning view from the top of the hill. On a clear day, you can also see the Gulf of Cambay. Lot of gold and silver ornaments and money is donated here. Shri Adishwar temple is the first and finest temple on the Shatrunjaya Hill. This temple is dedicated to Shri Adishwar, one of the most important Jain Tirthankars. This temple is one of the most magnificent and sacred temple of the Jains community. The Chaumukh or four-faced temple is the biggest temple located on the hill. This temple was built by a wealthy merchant in 1618 to save his soul. This temple has an image of Adinath which face out in the four cardinal directions. On the top of the hill a Muslim shrine of Angar Pir is also located where the childless women offer tiny cradles in the hope of conceiving. Besides these, there are various other temples like Kumar Pal, Vimal Shah and Sampriti Raj, named after the wealthy Jain merchants. 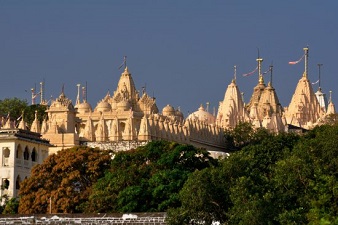 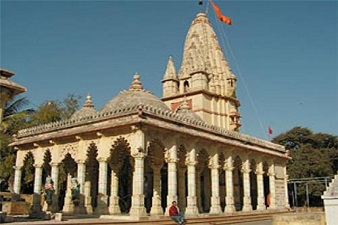 Bileshwar is located about 15 kms east of Porbandar in Gujarat. The Shiva Temple dates from the early 7th century and is one of the finest examples of early temple architecture in Gujarat. According to legends, when the army of Mughal Ruler Aurangzeb came to destroy the temple then a poisonous substance known as Bhamra was produced which killed all the soldiers at the temple. The temple is still visited by devotees of Mahadev in large numbers all round the year.

Gop is a very scenic village situated about 50 kms north east of Porbandar and midway on the Porbandar-Jamnagar road. The 6th century temple dedicated to Lord Shiva dates from the Maitraka period (6th – 8th centuries) and is a rare example of an early Hindu temple. The sanctuary is on a raised platform and has a pyramidal roof with an amalaka or a circular disk. The whole temple complex is in a dilapidated state now. 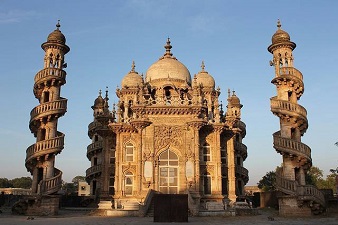 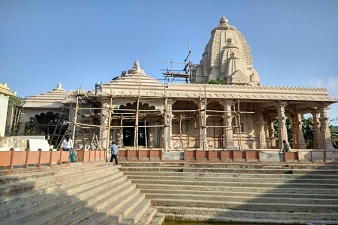 Bhalka Tirth is situated halfway between Veraval and Somnath. At this place, Lord Krishna was mistaken for a deer and wounded by an arrow. The legendary spot is at the confluence of three rivers. This place is entered through the small Sangam (confluence gate), known as the Nana. North of this sacred spot is the Suraj Mandir or Sun Temple. This ancient temple was destroyed by Mahmud of Ghazni. The temple, with a frieze of lions with elephant trunks, probably dates from the same time as the Somnath temple.

Nishkalank Mahadev Temple in Koliyak, Bhavnagar is full of wonders and awe. This temple is buried under the sea and surfaces only during low tides. On a high tide day, all that can be seen are the flag and a pillar. It is beyond ones comprehension that there is a Lord Shiva Temple just under the fierce sea. This temple is still in use, and people visit this place on foot! The temple has five distinct Swayambhuhu Shiva Lingams inside. This is definitely one of the best spiritual destinations to be visited. 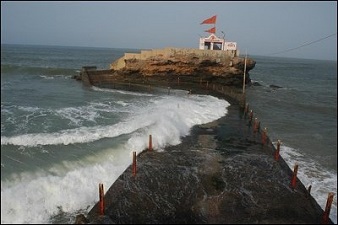 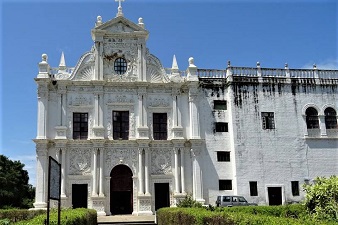 It is located in Diu on the west coast of India, at the mouth of the Gulf of Cambay. Its construction is dated to 1601 AD. Built in the style of a similar basilica church namely, the Bom Jesus Basilica at Goa, its construction was completed in 1610 AD and dedicated to Our Lady of Immaculate Conception.

St. Thomas Church is a Gothic style church situated in the beautiful and peaceful city of Diu in the Union Territory of Daman and Diu in India. This gigantic church, originally built in 1598, has now been acquired by the government authorities and has been converted into a museum, doubling up as a repository of archaeological findings. Today, known as the Diu Museum, it houses a lot of important antique statues, inscriptions on the stone by ancient rulers, magnificent wooden carvings, idols, shadow-clocks and various other important artifacts, all of which give us a peek into the history of Diu and its past, when it was colonised by the Portuguese. 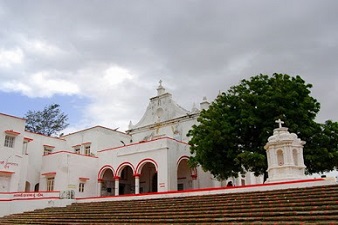 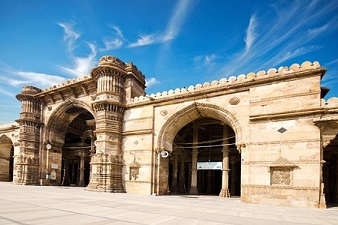 The Jama Masjid was built by Ahmed Shah in 1423. The building materials were provided to this mosque by the demolished Hindu and Jain temples. The 260 columns support the 15 domes at different elevations. There were once two shaking minarets, but they lost half their height in the great earthquake of 1819 and 1957. The 2001 earthquake then took its toll, leaving cracks in the masonry and destroying several jalis. 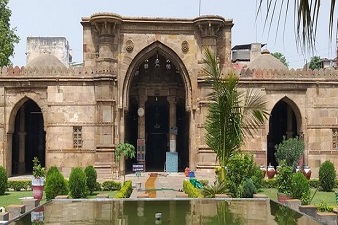