Ranging geographically from the desert plains of Kutch which occupies the northwestern part of the state to the moist forests of the Dangs in the southeast, Gujarat’s variety of habitats makes it an ideal destination for those interested in wildlife viewing and bird watching. Some of the national parks and sanctuaries that have accommodations and other facilities for the eco-traveler are :-

This sanctuary comprises the shallow Nalsarovar Lake and its environs, spanning about 130km, with a checklist of about 250 birds seen over the years. The lake is a paradise for birdwatchers and photographers, especially in winters when it attracts more than 100 species of migratory birds. The flooded fields around the lake are the habitat of the threatened Saras Crane and globally-threatened vultures are sometimes seen in the fields. The dry margins of the lake and the reeds in the shallows should be scanned with binoculars as they can yield sightings of wading and waterside birds. The boats in the tourist zone, and at Ranagadh, on eastern end of the lake, belong to communities like the Jath, Padhar and Koli who are familiar with the wildlife and often take visitors close to the birds. Rafts of motley ducks can be seen and the numerous islands on the lake are roosting sites for many birds. Flamingos, storks, ibises and spoonbills are often seen feeding in the shallows. Pelicans fish in the open waters of the lake, driving the fish into the centre of their flock for communal feeding. There are chances of seeing raptors too like the Marsh Harrier, Greater Spotted Eagle, Osprey and the threatened Pallas Fish Eagle. 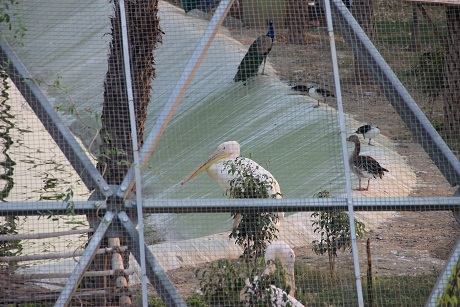 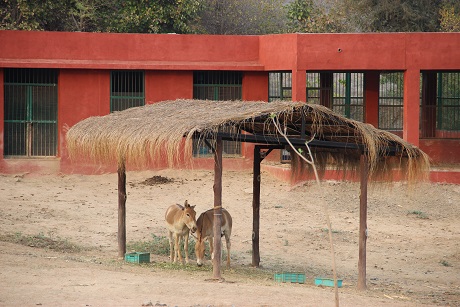 Spanning an area of about 4950 sq km of the Little Rann of Kutch and its environs, the Wild Ass Sanctuary is the last home of the Indian Wild Ass. This handsome, chestnut brown and white endangered species can be seen while driving across the Rann of Kutch. Other species that could be seen during wildlife viewing drives in the sanctuary are the Nilgai or blue bull antelope, Blackbuck or Indian Antelope, Chinkara or Indian Gazelle, the endangered Indian Wolf, Desert and Indian Foxes, Jackal, and smaller species characteristic of the desert habitat.
The unique geography of the Little Rann of Kutch also makes it a good place to watch birds typical of the desert. The Rann is especially good for larks and wheatears. The Macqueen’s Bustard can be seen in winters.
At the edge of the Little Rann of Kutch are lakes and marshes that attract waterfowl in numbers beyond comprehension. Huge flocks of flamingos, pelicans, cranes, storks, geese and ducks can be seen in winters. The Little Rann is also one of the few places in India where the Lesser Flamingo is breeding successfully.

The grasslands and lakes of Kutch fall on the migratory route for many species of birds with lakes like Charri in the Banni grasslands becoming important bird areas. The Lala Bustard Sanctuary near Naliya is one of the top sites for the Great Indian Bustard round the year, the Macqueen’s Bustard in winter and the Lesser Florican which breeds here during the rains.
It is a good sanctuary to watch larks, warblers, wheatears and sand grouse. There are good chances of seeing Black Francolin in the sanctuary. This sanctuary and the Banni region are the habitat of vulnerable species like the Stoliczka’s Bush chat and White-naped Tit. The Grey Hypocolius is often seen in the district. The Banni grasslands are also highly rated by those interested in raptors as a breeding ground of Tawny and other eagles, and for large concentrations of roosting eagles in winter. 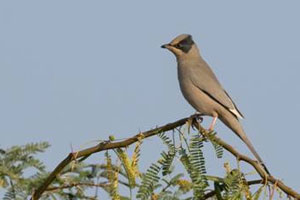 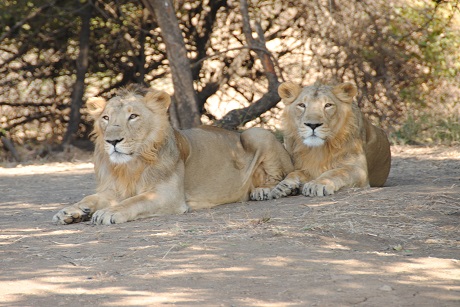 The 1412 sq km Gir wildlife reserve comprises of deciduous forests, evergreen and semi-evergreen vegetation, thorn scrub and grasslands. It is well known as the last remaining habitat of the Asiatic Lion. Gir also has a large leopard population. As 359 lions and more than 300 leopards have been counted in Gir during the last census, it may be the best big cat reserve in India with few returning without seeing the big cats over a three or four day stay.
The sanctuary also has a thriving population of Sambar and Spotted Deer, Chinkara gazelle, Nilgai and Chowsingha (world’s only four-horned antelope) attractive birds like the Asian Paradise Flycatcher, Painted Sand grouse, Tree pie, Hoopoe, etc, can be seen while driving through the sanctuary which is known for its raptors like the Changeable Hawk Eagle and crested Serpent Eagle that breed here. Crocodiles are seen at the reservoir and at rivers flowing through the sanctuary.

The Savannah-like grasslands of Velavadar National Park support one of India’s largest populations of the Blackbuck or Indian Antelope. Large herds of this elegant antelope can be seen in the national park. Velavadar is also one of the few national parks in India where the Indian Wolf is proliferating successfully. Nilgai, Jungle Cat and Indian Fox are often seen while touring the park. Velavadar is also known for its birdlife including vulnerable species like the Stoliczka’s Bush chat and Saras Crane. It hosts one of the world’s largest harrier roosts in winter. 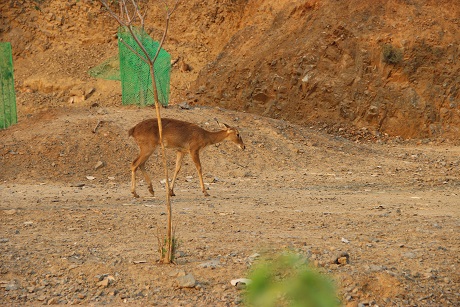 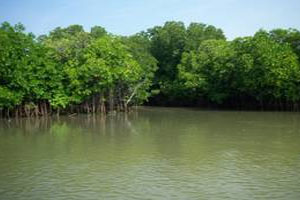 Rich in the diversity of terrain, Gujarat offers eclectic mix of flora and fauna. Among the many wondrous sanctuaries is the Marine National Park in Jamnagar which is spread over 162.89 sq kilometres. Spread over another 457.92 sq kilometres is the Marine Sanctuary.
In the Gulf of Kutch, there are 42 islands out of which 33 islands have coral reef. There are islands with sandy beaches and mangrove swamps. These islands are a treasure-trove of marine species and a paradise for birdwatchers. The site has coral reefs, mangroves, sea-grass beds, mudflats, network of creeks and other ecosystems which support rich marine and bird life. Here one has a chance to spot octopus, puffer fish, sea turtles, lobsters, crabs, dolphins, ray fish, jelly fish, star fish, sea anemones, colourful corals, exotic marine flowering plants etc. And the lucky few can even sight a dugong which resembles the seal.

Khijadiya is a distinctive manmade, coastal, freshwater wetland in semi-arid biogeographic zone in Jamnagar next to the Marine National Park. It came into existence due to two bunds/embankments built to apprehend salinity ingress from the sea into the mainland and to prevent freshwater draining into the sea. This created a unique complex “Saltwater-Freshwater” ecosystem with variety of habitat types and ecosystems. This wetland system provides favourable breeding, feeding, roosting, and staging grounds for a great variety of birds during various seasons of the year. Along with the marine and fresh water habitats, there are also marshy lands, mangroves, Prosopis areas, mudflats, salt pans, creeks, forest scrub, sandy beaches, and even farmlands bordering the area. This makes the place a paradise for more than 250 species of resident and migratory birds, including globally threatened species such as Dalmatian pelican, Asian open bill stork, Black-necked stork, Darter, Black-headed ibis, Eurasian spoonbill, and Indian skimmer, and provides birdwatchers with a delightful chance to sight rare birds in large numbers. Due to its strategic location close to the Gulf of Kutchh, on Central Asian flyway, it acts as a regular route for the migratory birds that come from Iran, Afghanistan and Pakistan to visit the sanctuary and its neighbouring areas.